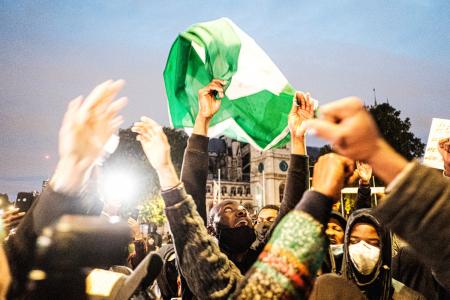 On June 5th, Nigerian President Mohammadu Buhari announced a countrywide ban on Twitter after the company deleted the President’s recent tweets about the Biafra civil war, claiming they violated the platform’s policy on “abusive behavior.” The government announced shortly thereafter that those found tweeting would risk prosecution. This move comes amidst an already fraught environment in which young Nigerians have been targeted by the police for having smartphones or laptops, culminating in the 2020 #EndSARS protests, a youth-led campaign against police brutality.

The COVID-19 pandemic, and the resulting shift of the public into virtual environments, has further underscored the importance of social media and the internet. This shift has blurred the lines between the public and private spheres, bringing the government into our phones - and ultimately into our homes. This has simultaneously propelled a new age of oppression, but now the common netizen can fight back with their voices or tweets.

In Nigeria, there are an estimated 40 million Twitter users. Victor Uahomo, a Nigerian community leader for internet advocacy, notes the important role Twitter played in the recent protests:

“Twitter as a social platform has provided Nigerians, especially youths, the opportunity to expose, call out, or question the Nigerian government when it's not doing what it ought to do. The #EndSARS protest that happened last October was organised, strategized and succeeded because the Twitter community in Nigeria was the brains behind it.”

Heavy use of the platform by activists may have prompted the government’s decision to take swift action against Twitter this June, when calls emerged for a new nationwide protests to take place on June 12th in response to government inaction in addressing pervasive violence and insecurity taking place across Nigeria. Victor believes that the government saw that they needed to act fast to regulate social media in order to avoid a repeat of last year’s events. “I think the Nigerian government has seen the threat that this protest brings to the government if nothing is done about it.”

In spite of the ban- and thanks to the use of VPNs - the 12th June protests trended worldwide. The Nigerian government however, has doubled down on their attempts to limit freedom of expression. In addition to urging media companies to delete their Twitter pages, and to stop using the microblogging site as a platform to share news, the Nigerian government has also been clamping down on media houses by imposing fines and shutting down TV/Radio stations that oppose or criticize the policies of the government.

Freedom of Speech as a Fundamental Human Right

Isaac Oloruntimilehin, another Nigerian community leader and open internet activist,  declared that the Nigerian government’s decision to ban Twitter is an action that infringes on the fundamental human rights of Freedom of Expression and Freedom of Assembly enshrined in the 1999 constitution of the Federal Republic of Nigeria. It also infringes upon the Democratic Principles of an Open Internet such as Freedom of Expression, Freedom of Assembly and Association, and Accessibility. Beyond being used as a platform to address social issues in the country and providing Nigerians with an avenue to hold the government accountable, Twitter can also serve as an economic lifeline. Isaac notes that many Nigerians make use of the platform for promoting their businesses and reaching their customers. The ban, he says, “poses a threat considering the high level of unemployment and poverty coupled with the current recession the country faces.”

He added that while social media platforms can  have negative consequences, such as the spread of fake news, hate, and misinformation, the decision of the Federal Government to ban the platform outright is excessive and alternative measures need to be reconsidered for addressing the issues they have raised.

A Contestation of Power, Voice and the Right to Live

The Twitter ban is not unprecedented. Crackdowns against the freedom of speech amidst protests and political upheavals have resulted in internet shutdowns, arrests and killings of journalists, and a wave of repressive laws. At stake are answers to the fundamental questions of: who has the right to speak, who has a voice in civic matters, and indeed, who has the right to live?

Uffa Modey, co-founder and Global Lead of Digital Grassroots from Nigeria, has raised concerns about  the risks the Twitter ban poses for the  safety of women and girls. For example, Twitter is frequently used to share information about daily traffic conditions, including spots that are notorious for robbery. Without the app, high-risk targets such as women driving alone, may not know to avoid certain routes, increasing their chances of being robbed or kidnapped.  This can put families in a constant state of psychological anxiety,  affecting the mental health and societal wellbeing of entire generations.

Uffa adds that at some point the intentions of the Nigerian government towards the growth and development of all Nigerian citizens becomes questionable. The government claims that Twitter as a platform was threatening Nigeria’s corporate existence, and cited vague security concerns that social media tools are being used to fuel political instability in Nigeria. However, it is not evident that the benefits of Twitter access for developing the lives of Nigerians were considered before the ban went into effect, especially given that it happened without soliciting public opinion, or being approved through by the national assembly.

Internet Advocacy as a Tool Against Oppression

For societies facing loss of lives and livelihoods, as well as insecurity and injustice, social media platforms can democratize the ways in which citizens can self-organize, express the burdens of inequalities, and fight for justice. However, members of  political ruling classes will instead view these actions as ‘lawlessness,’ or a national security issue when in fact it is a human right. In a democratic nation, everyone's voice must count, and a free and open internet ensures that is possible.

There are many actors involved in shutting down the internet or instituting a nationwide ban on a social platform such as Twitter. It is not the President alone who acts, as in Nigeria’s case. There are entities, stakeholders, and sycophantic supporters who believe they are simply doing their job, or are silent bystanders because it does not affect their safety, wellbeing or socio-economic status.

Beyond Nigeria, internet advocacy has become a tool for young people to defend their dignity and human rights. Recently, Digital Grassroots conducted an online course for emerging digital rights leaders to build their capacity to advocate on key issues in their communities, such as campaigning for a review of a restrictive internet bill; increasing the safety of children online; raising online awareness of offline discriminatory health practices; and increasing women’s participation in internet governance.

As the Nigerian government (following pressure from ECOWAS) considers reconciliation with Twitter, the conditions that enabled this ban on the freedom of expression must not be tolerated. The internet has become a fundamental economic and social lifeline, and access to critical communications platforms cannot be compromised.