THE NEED TO UNDERSTAND OUR DIGITAL RIGHTS IN OUR OWN LANGUAGES 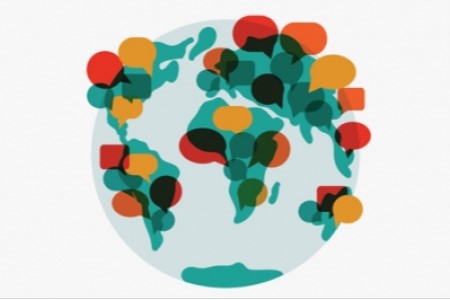 The fight towards a free and democratic internet has numerous battlefields, but equally important is the creation of a network representative of different cultures and societies and in compliance with human rights standards.

The fight towards a free and democratic internet has numerous battlefields, but equally important is the creation of a network representative of different cultures and societies and in compliance with human rights standards.

One battlefield of great importance is related to the diversity of languages on the internet. With an astonishing 80% of the content in English by the mid 1990’s, the predominance of the language was undeniable, but it has luckily shifted to a more inclusive landscape with languages such as Chinese, Spanish and Arabic being represented as well.

In a rapidly shifting world such as the one we are living in now, language and cultural preservation is of the utmost importance and needs to be included when calculating the benefits posed by the internet and the globalized world.

Globalization as a phenomena has indeed brought numerous benefits to humanity. It has also brought a cultural avalanche coming predominantly from the Global North that can be easily found in music, films, books, and the media. This can endanger the visibility of other points of view and perceptions about certain issues and eventually end up in their total erasure. The internet must become a tool of preservation and function as a mirror that assures and protects the cultural and linguistic richness of the world.

The United Nations Education, Scientific and Cultural Organization (UNESCO) projected that at least half of today’s living languages will cease to exist by the end of this century if nothing is done to save them. The lack of integration with digital technologies and the internet is indeed a factor that contributes to this cultural debacle.

Also, understanding our rights online is very important and deeply interconnected to the cultural and language richness that must be ensured online. Our capacity to freely express in the online world is undeniably related with our possibilities of accessing information online that is meaningful and significant both to our context and necessities.

To this end, people around the world-and especially from Global South regions-need to shift from a mere online consumer habit to a content creation habit, with content that is relevant to their contexts and realities, and in languages other than English.

This must be facilitated through public policy and capacity building processes that take into account the digital divide among countries and regions, languages, digital literacy, and so on.  This also means that content outside of mainstream languages must be made available online and it’s a responsibility that must be shared by all internet actors involved in its governance.

The internet can indeed become one of the greatest tools to positively strengthen democracy at a global level. But this can only happen if the internet speaks all languages to then truly become a global force.

To this end, and to reach a bigger audience, the “Democratic Principles for an Open Internet” have been entirely translated to Spanish, aiming to make available the information in other languages outside of English, and to keep enhancing the capacity of people around the world to identify an internet where human rights are fully ensured.