The Increasing Demand for Democratic Rights Online: A Case Study From Sri Lanka 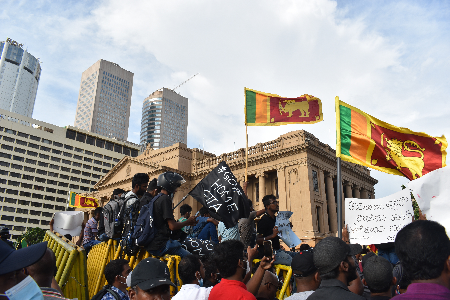 Sri Lanka is currently experiencing its worst economic crisis ever and holds Asia’s highest rate of inflation. This article explores how Sri Lanka's economic crisis sparked a transformation of the country's online discourse and digital landscape.

The Government of Sri Lanka (GoSL) attributes many of the ongoing issues to the impact of the COVID-19 pandemic that resulted in multiple lockdowns, thus affecting several industries and the overall economy. However, a closer look at the country's economic status since the end of the civil war in 2009, suggests additional factors contribute to the country’s economic woes. In addition to the pandemic, high debt repayments and dwindling foreign exchange reserves exacerbated by government-mandated tax cuts are contributing to Sri Lanka’s current crisis.

Sri Lankans have felt the impact of this crisis as there has been a shortage of essential items, such as gas, fuel, milk powder, and basic medicines. Additionally, the Ceylon Electricity Board (CEB), the nation’s largest electricity company, announced 10-13 hour power cuts across the country. Protests demanded accountability due to the government ‘s economic mismanagement and called for the resignation of the current President, Gotabaya Rajapaksa. The protests were met with the declaration of a state of emergency and a weekend curfew. These measures were followed by the blocking of multiple social media sites such as WhatsApp, Telegram and Twitter. The restrictions to social media sites raised concerns for citizens, journalists, and academics due to its impact on digital rights. For instance, Journalist Roel Raymond filed a fundamental rights petition against the state of emergency imposed on April 1, 2022 and the social media ban that was imposed on April 3, 2022.

Sri Lanka’s history of online discourse has primarily focused on addressing hate speech and violence against women. During the presidency of Mahinda Rajapaksa from 2005 to 2015, Sri Lanka witnessed the establishment of several ‘Sinhala Buddhist’ nationalistic groups, such as the Bodu Bala Sena, an absence of media freedom, and a rise in hate speech targeting minority groups such as Muslims and Tamils.

In 2018, the GoSL blocked social media sites following anti-Muslim riots which brought about a spread of communal violence in Digana-Kandy (Central Province). In April of 2019, social media was blocked after the Easter Sunday attacks on churches and hotels across Colombo. May of 2019 saw another instance of blocking of social media as communal violence began in the North Western Province, again due to anti-Muslim sentiment that was spread throughout the island following the Easter Sunday Attacks. The bans affected social media sites such as Facebook, Whatsapp, Instagram, YouTube, Viber, Snapchat, and Twitter.

The GoSL claimed that measures to block social media websites were taken in an attempt to curb the spread of hate speech and disinformation. However, digital rights advocates have raised concerns about the tactic’s broader impact across internet users on access to information and freedom of speech. There is also an increase in engagement between digital rights advocates and citizens on understanding the laws governing digital spaces in Sri Lanka.

Though the government claims to resort to social media blocks to curb violence, studies suggest this is not always the most effective way to reduce hate speech and limit disinformation. For example, a case study on network shutdowns in India found that such shutdowns may actually increase the intensity of violent mobilization. This case study shows that internet shutdowns in Jammu and Kashmir in 2016 led to a rise in protests and riots during the period of shutdowns.

The ongoing economic crisis in Sri Lanka has and continues to result in many grievances for its population, as citizens struggle to access basic needs. However, there is a positive shift that can be witnessed in the digital landscape in Sri Lanka. Over the past few years, online conversations saw a rise in hate speech against the Muslim minority following the rise in Sinhala-Buddhist nationalism and adoption of government policies explicitly targeting Muslims. However, currently there is a shift in online conversations focused on the rights of all people. The blocking of social media websites is garnering more attention, as citizens demand that their digital rights be upheld. The public protests and resilience that call for democratic values to be protected on and offline provides hope for its citizens. However, it is yet to be seen if Sri Lanka is a positive example of the advancement of digital rights or if this just a momentary victory brought on due to its economic crisis.