The Facebook Papers: How Authoritarian Governments Are Pressuring Platforms to Stifle Free Speech 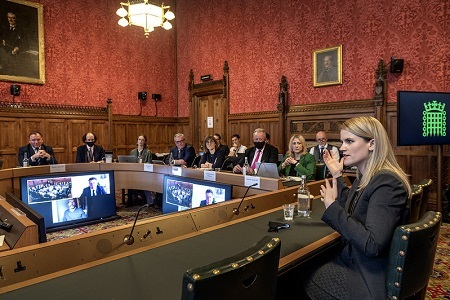 Last year’s avalanche of media stories about Meta (formerly Facebook), capped by revelations from the whistleblower Frances Haugen, a former product manager for the company, has put a spotlight on Facebook and how the platform could exercise greater transparency to allow citizens to have access to high quality and independent information.

The increasing turn to social media platforms for news has not gone unnoticed by autocratic leaders around the world today, whose hold on power depends on the ability to  silence dissent, muzzle truth-telling, and censor independent news media. That is why content moderation policies must consider their real-life impacts on human rights and press freedom. Divorced from these principles, these policies can have devastating real-life consequences on burgeoning democratic movements and media systems under autocratic regimes.

Following Haugen’s document release in 2021, the Washington Post reported that Facebook CEO Zuckerberg gave in to censorship demands from Vietnam’s communist government, removing more than 2,200 posts between July and December 2020.

Commenting on the issue, the human rights organization Amnesty International warned that “Facebook’s compliance with these demands sets a dangerous precedent.”  The group further cautioned that, “governments around the world will see this as an open invitation to enlist Facebook in the service of state censorship.”

Facebook is estimated to take in around a billion dollars in annual revenue in Vietnam. The country is also the company’s largest source of revenue in Southeast Asia and a huge potential growth market. Many experts, including  Haugen, believe that Facebook’s rapacious focus on profit undermines its democratizing potential.

“The platforms themselves are not merely letting it happen—they’re increasingly complicit” she added.

All of this has significant impact on democratic movements and independent media across the Global South, where the inconsistent decisions made by social media giants are exploited by autocrats to silence critical voices and media organizations.

For example, the Vietnamese Communist Party, emboldened by years of systematic online repression and acquiescence from companies like Facebook, jailed five journalists in October 2021 for what it described as “spreading anti-state content” on Facebook-based news outlet Bao Sach (Clean Newspaper). The news page is currently not available on Facebook.

Meanwhile, the situation is not any better in India, often called the world’s largest democracy but which is now seen as descending into the ranks of “flawed democracies” or “electoral autocracies.” Facebook’s failure to deal with incitement of violence and its  lack of a consistent content moderation policy  have bolstered the government of India’s effort to undermine critical voices and independent media.

According to its 2021 transparency report, Facebook removed 442 items between January and June 2021 “in response to directions from India’s Ministry of Electronics and Information Technology for violating Section 69A of the Information Technology Act.” The law Facebook cited to justify its compliance with government censorship requests “undermines the public’s right to receive information, which is a core component of the fundamental freedom [of] speech and expression,” as prominent Indian lawyer and Executive Director of the Internet Freedom Foundation Apar Gupta wrote in The Indian Express.

Further, he described the law’s emphasis on secrecy, which allows the government to block users’ accounts without disclosing a reason as “an anti-democratic practice that results in an unchecked growth of irrational censorship.”

In its effort to aggressively police content online, the Indian government recently reinforced the law. In February 2021, it unveiled new IT Rules which give it outsized control over the media. Several groups have criticized the rules, including the Editors Guild of India, which described them as “regressive” and “adverse to the freedom of the press,” and three UN Special Rapporteurs, who found that these new regulations fall short of international human rights standards.

Udbhav Tiwari, public policy advisor at Mozilla, warned that the new IT Rules would have “disastrous consequences for the open internet.” The new provisions, he explained, would threaten freedom of expression, privacy, and security, by forcing platforms to verify users’ identities, implement strict time limits for the removal of content or sharing of user information with law enforcement, and expand the government’s ability to remove news media content.

Facebook has already expressed willingness to comply with these rules, raising the question of whether social media companies are enabling undemocratic leaders to censor the internet and stifle critical commentary. By complying with directives that do not conform to international human rights standards for restrictions on freedom of expression, the company becomes complicit in stifling freedoms of speech and of the press around the world.

Race to the Bottom – Legal Exploitation

In its 2021 Freedom on the Net report, Freedom House noted that a “growing number of governments are asserting their authority over tech firms, often forcing the businesses to comply with online censorship and surveillance.” These developments, the report argued, have “contributed to an unprecedented assault on free expression online, causing global internet freedom to decline for an 11th consecutive year.”

Feeding into this trend, in at-risk countries such as Ethiopia, where Facebook has been accused of failing to curb the spread of content inciting violence, the government has introduced a new hate speech and disinformation law that could be used as a  pretext to force tech companies to silence critical voices, according to international rights organization Article 19.

This tactic is not unique to Ethiopia. More and more countries in Africa now are also passing laws against online hate speech. In practice, however, these laws are often an avenue for censorship.

In a recent article, Tomiwa Ilori, an internet researcher at the University of Pretoria, stated that in Africa “real online harms are not only not being adequately addressed by governments but the regulatory responses to these problems are harming freedom of expression.”

Tomiwa argued that, “Nigeria’s Cybercrimes (Prohibition, Prevention Etc) Act, Uganda’s Computer Misuse Act, the Kenyan Computer and Cybercrimes Act, and the Malawian Electronic Transactions and Cybersecurity Act are so vaguely worded that they can be weaponized to stifle dissent.”

This slew of new laws will allow these countries to expand their efforts to censor social media content. Social media companies argue that, in these cases, compliance is the lesser evil: if their services are cut off, people in authoritarian countries will be worse off, with fewer means to communicate.

All of these attempts to regulate online speech point to how the digital ecosystem has now become a hotly contested battleground and why tech giants must, without compromise, place human rights and greater transparency—rather than profit—at the core of their decisions.

Mark Zuckerberg has rejected all claims that his company puts profit over safety. “At the heart of these accusations is this idea that we prioritize profit over safety and well-being. It’s just not true,” he responded to critics in a Facebook post last October.

In 2020 however, Facebook’s ad revenue from all the regions in the Global South amounted to $23 billion. This represented more than half of what it made in the United States and Canada combined. Despite its substantial gains from the region, the company dedicated significantly fewer resources to dealing with misinformation in the Global South.

The company’s underinvestment in context-sensitive content moderation in the Global South leaves the door open for authoritarians to cloak their attempts at censorship in a veneer of legitimate concern over unchecked misinformation and incitement of violence. Facebook has a responsibility to strengthen its efforts to combat hate speech and misinformation on its platform to protect its users and prevent autocrats from taking advantage of its negligence to justify ramped-up censorship.

Access to information and freedom of expression, including public conversation on social media, are a vital part of strong democratic processes.

Regardless of where one stands on how tech giants should navigate challenges from autocratic leaders, the principles of free speech and press freedom should remain non-negotiable.

Social media companies’ failure to place human rights at the core of their operations can create a vacuum of responsibility, which will be exploited by autocratic leaders who have no interest in advancing free speech and defending an independent press.

To safeguard those pillars of democratic society, tech multinationals should significantly increase their investment in the Global South to address the challenge of misinformation and incitement of violence. To that end, these companies should invest in staffing field offices with experts who are familiar with the local context and can be contacted by civil society.

Social media companies should also consider a significant increase of investment in automated systems for detecting speech inciting violence and misinformation in languages other than English, particularly in high-risk regions.

These recommendations are only a starting point. Meta and other social media giants must commit to centering users’ safety and their right to free expression in their policies. For this process to be inclusive, effective, and transparent, these companies need to engage with human rights groups and take steps to prioritize their users in the Global South.

Gideon Sarpong is a co-founder of iWatch Africa and a 2021 Policy Leader Fellow at the European University Institute, School of Trans-national Governance in Florence, Italy. Gideon is also currently a Reuters Fellow at the University of Oxford, United Kingdom.